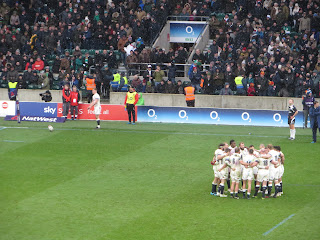 Three losses on the bounce and Ireland securing a Grand Slam at Twickenham Stadium was not what Eddie Jones and his side wanted to contemplate before kick-off. However, it was the reality that met them after the full-time whistle on Saturday afternoon.

This Six Nations campaign has been far from a walk in the park for England and instead it's seen them finish with fifth position next to their name. Following the full-time whistle their head coach first praised Ireland's performance and his side's effort before focusing on the period that they find themselves in:

"Our team played with plenty of character and stuck at it but we just weren’t good enough and the other team was too good. We gave them penalties that were avoidable which has been a trait for us during the Six Nations and allowed them to skip away too far at half-time. Then, we were chasing our tail for the whole game.

"You have these runs and I’ve coached long enough to know that you have them. Sometimes you get out of them quickly and sometimes it takes a bit longer. At the moment we’re in a position where it’s gone on for three games. It’s not nice but it’s part of the process of being a better team."

England's coach is right and if you’ve ever been part of a sports team striving to be the best then you’ll know that the road there isn’t easy. It isn’t plain-sailing and it doesn’t run smoothly. I know this from personal experience having progressed up the ranks to the national level as a netball player.

In sport there are days, matches, tournaments and championships when things go astray. Performances are put on the park, or on the court in my case, that you know just don't reflect your personal capability or your team’s capabilities. Injuries occur, players are missed, confidence is knocked and as a result losses happen. One loss or even two or three arrive. It's sport and that's the reality of it.

Confidence is something that can play a major part in runs like these, be them good or bad runs, and Eddie Jones discussed this his post-match assessment.

"I’ve coached over 150 Tests and you have these runs. Everything is going well then you lose a game, you lose a little bit of confidence and you start losing those 50/50 decisions. Then you get some injuries and it just becomes a bit of a cycle that you need to break.

Up until this point the Australian's England side have shown themselves to be an all-encompassing outfit. By that I mean a side that was able to dominate others or in separate instants grind out results during indifferent occasions. However right now, that skill of grinding out results, has gone missing and it’s linked to confidence.

"It’s funny isn’t it? Because up until now that’s what we have been exceptionally good at [finding a way to win] and as I said you lose one and that little bit of confidence ebbs away. You don’t get the bounce of the ball, you don’t get the 50/50s and than you don’t find a way to win. How do you get it back? No-one knows you just have to keep at it."

As I mentioned in my pre-match thoughts there are fundamental elements to England's game right now that aren't perfect - their breakdown work and their creativity moving forwards in particular. However when their confidence returning, the latter in particular will start moving back on an upwards trajectory. When George Ford arrived onto the pitch on Saturday and Owen Farrell moved back to 12 England started to show more. The Leicester Tiger is an individual who I would have in my side every day of the week and as a duo I remain of the belief that together they are a key partnership to helping this side to spark when they couple fresh ideas with confidence.

Will Eddie Jones bring in a new coach specifically to add an extra element to England's attack? Who knows? If he does that may be a productive move and one that helps to accelerate the re-emergence of their confidence. Why? Well, when you're attacking with conviction and flair and delivering moves that other sides can't cope with then that breeds positive feelings. That ability in turn energises the whole group and can be the catalyst to turning around a run of this ilk.

On Sunday morning shots will be fired, metaphorically of course, at Eddie Jones and his England outfit. The number five will be shouted from the rooftops and their current flaws discussed at length. However, I personally would urge a spot of perspective to be delivered and consideration given to the fact that no side in the world runs white hot constantly.

England's Six Nations campaign has been a tough one for the players involved and one that they would not have envisioned ahead of their opening game. However, as long as it's build on and learnt from that's what counts. Right now, would England win Rugby World Cup 2019 in their current form? No but that doesn't mean that they're down and out or that it's time for loud calls of 'Eddie out'.
at March 17, 2018